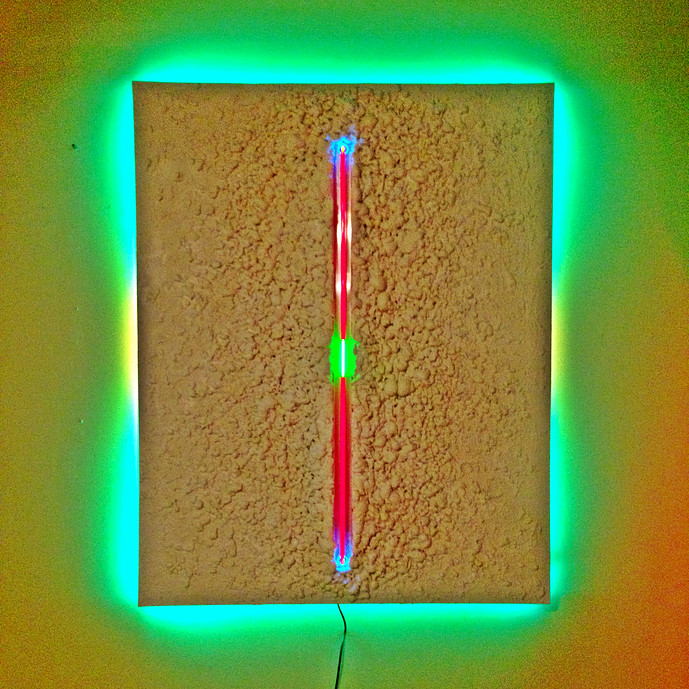 Nate Sheaffer began studying art under Robert Howard at the University of North Carolina, Chapel Hill in 1984.  Large Assemblies of found steel objects, welded and bolted together begged for lightening in some fashion.  Bob Howard said one day, “You oughta go see Jerry Noe, put some neon on those things.”  The start was just that simple.

The next semester, Independent study with Jerry Noe in the same department led to a lifelong friendship with John Wilhelm, then owner of Paradise Neon, located on Hillsborough Street in Raleigh.  Just when Nate was about to graduate and had hopes of going to work for John at Paradise Neon, John was bought up by Illumelex Corporation.

“Start up your own shop,” John said.  “You’re not gonna’ like commuting to the other side of Raleigh from Chapel Hill for minimum wage as an apprentice.”

And so, three months after graduating UNC-CH with a degree in German, Nate rented a space behind Mariakakis Greek Restaurant in Chapel Hill, and founded Neon Impressions, Inc.  Early work focused on abstractions until the reality of making rent and a living turned Nate down the road of commercial, then later, production neon tubing manufacture.

Along with his brother and partner, Curtis, Nate grew the company quickly, adding a third brother, Garth, as the first employee, followed by dozens more glass blowing apprentices, assemblers, and eventually, an engineer.  Into the early and mid nineties, production, wholesale neon tubing and sign manufacturing thrived.  The company moved twice – first into a 10,000 square foot hatchery in Pittsboro, NC and then into the former Bells School on Jordan Lake.

In 1998, Neon Impressions, Inc. began working as a job shop for large production houses creating tens of thousands of units annually for the alcohol and tobacco industries.  In early 1999, the sign industry and production neon signage became one of the many industries to fall prey to offshore competition.  It was for the best, for Nate, as production neon signs and wholesale tubing had caused him to stray far from creative work.

For the next seven years, Nate worked as a project manager and estimator for Van Thomas Contractor, Inc. –  a small but respected commercial general contractor located in Siler City, North Carolina. In 2005, with the birth of his son, and later with the birth of his daughter in 2007, Nate transitioned from the work force to the world of a stay-at-home dad.

Cut to 2012, when both children are in elementary school and blocks of time large enough to create art begin to appear with consistency.  Nate re-joined the Chatham Artists Guild – an organization whose inception was part of his early artistic success as a founding member of the Chatham Artists Studio tour 20 years earlier – and once again found his home with a creative, artist’s life.